JASTIP Opening and Signing Ceremony was held in Bangkok on February 26, 2016.

JASTIP will be officially launched at a ceremony held at the Embassy of Japan in Thailand in Bangkok on February 26, 2016.

The Japanese Ambassador’s Residence in Bangkok

Held at the Japanese ambassador’s residence, the ceremonies were attended by over 100 people, including government officials, university faculty, and people from the private sector operating in Thailand. 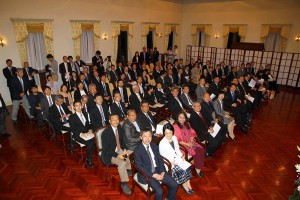 The opening ceremony began with an address by Mr Kazuo Todani, Deputy Minister of Education, Culture, Sports, Science and Technology, which was followed by congratulatory addresses by Mr Hideo Fukushima, Minister (Deputy Chief of Mission) of the Embassy of Japan in Thailand, Dr Weerapong Pairsuwan, Deputy Minister of the Thai Ministry of Science and Technology, Ms Yoshiko Shirokizawa, Executive Director of JST, and Dr Alexander A Lim, chief of the science and technology division of ASEAN Secretariat.

Following the ceremony, Professor Yasuyuki Kono, Director of KU’s Center for Southeast Asian Studies and the representative of JASTIP, delivered his presentation on the project. Professor Kono explained that the JASTIP’s goal is to promote research on sustainable development at the initiative of researchers in Japan and ASEAN countries in order to promote social innovations that help make sustainable societies. This will carry forward by focusing on three global challenges Japan and ASEAN countries face: environment and energy, bioresources and biodiversity, and disaster prevention. Professor Kono also noted that the platform for cooperation in science and technology between Japan and ASEAN countries should enhance the visibility of these projects. 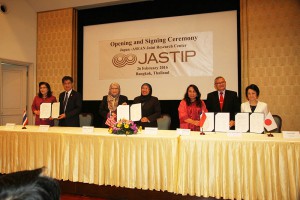 A press conference also took place to publicize JASTIP while participants discussed how to promote exchange among Japan and ASEAN countries at a reception.